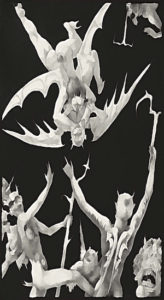 Many misconceptions loom about when broaching the topic of The Divine Comedy; or as most would call it, “Dante’s Inferno.” Its haunting and vast depths of literary darkness are but a mere shadow of its true basis of utmost redemption; thus the ‘Commedia.’

Entering into Dante’s Divine Comedy/La Commedia begins an incredible journey which is a personal voyage of discovery and revelation concerning Dante’s eternal salvation; and, at the same time, a universal moral and spiritual education for each individual who also dares to enter. The Inferno (Italian for “Hell”) is the first part of Dante’s 14th century poetic epic trilogy, The Divine Comedy, which is comprised of Inferno, Purgatorio and Paradiso. It is a symbolic journey through the medieval concept of Hell; and Dante describes hell as nine circles of suffering located within the Earth. In other words, the Divine Comedy symbolically represents the journey of the soul towards god, with the Inferno describing the recognition and consequence of sin.

The Divine Comedy was not titled as such by Dante; his title for the work was simply Commedia or Comedy. Dante’s use of the word “comedy” is medieval by employment and to Dante and his contemporaries, the term “comedy” meant a tale with a “happy outcome” – not a funny/comical story as the word would later come to mean.

Each cantina is composed of 34, 33 and 33 cantos. The first cantina, Inferno, is by far the most famous of the three and is often published separately under the title, “Dante’s Inferno.” In the Divine Comedy, Dante tells of his journey through the three realms of the dead – Inferno (Hell), Purgatorio (Purgatory) and Paradiso (Paradise.) His guide through Hell and Purgatory is the Latin poet, Virgil, who was the author of The Aeneid and his guide through Paradise is Beatrice, Dante’s ideal of a perfect woman and the woman that he loved and worshipped – though never married.

I too have enjoyed a similar journey, though in composing an Orchestral journey through the chronology of Dante’s Divine Comedy. I hope you enjoy…

Copy and paste this code to your site to embed.